The great green bush-cricket is one of the biggest and, because of its colour, one of the most eye-catching crickets of our region. It can be up to 3-4 cm long and its antennae can reach 5 cm as well. These long antennae show its affiliation with the bush-crickets (Tettigoniidae) and distinguish it from the grasshoppers’ family (suborder Caelifera).The males of this haematocryal insect begin to sing in the afternoon of sunny days. Doing so, they usually sit head down on high plants and chafe their forewings on a membrane in order to produce the characteristic chirr. The acoustic organ of the green bush-cricket resides on the knees of the forelegs and can be recognised by two small slits. Furthermore, crickets have got an additional organ that enables them to feel the slightest jolting and warns them about approaching enemies. To escape, the great green bush-cricket not only uses its strong hind legs, but also its fully developed wings in order to fly for some hundred metres.

The distribution area of the great green bush-cricket spreads all over Europe and Asia, cold regions and mountains excluded. Although this bush-cricket has for a long time been ranked among the most common crickets, its number has gone down dramatically. These days, the green bush-cricket benefits from the changing attitude in society leading to more and more extensively used areas. The typical places to find the great green bush-cricket are, besides rarely used grassland, borders of woods and sunny fallow ground. Trees and bushes are important too because the males can hide there while “singing”. Somehow benefiting from Men, these crickets can also be observed near villages.

If a female is attracted by the singing of a male, the copulation, which lasts for about an hour, begins. The female lays up to 600 eggs into the humid and loose soil with her ovipositor. Depending on the environmental circumstances, the eggs stay there for up to 5 years. After they have hatched out of the eggs, the grubs have to pass 7 stages until they are adult crickets. In summer, they reproduce and die in the first cold days of autumn. During the entire cycle, the great green bush-cricket eats predatorily; at first aphids and later small insects, caterpillars or even sick fellows. In contrast with some related, herbivore crickets, the green bush-cricket is an agricultural useful animal.

By the way, this cricket does not only hear and feel well, it has also got big compound eyes that make it see predators early and enable it to hide in the plants. 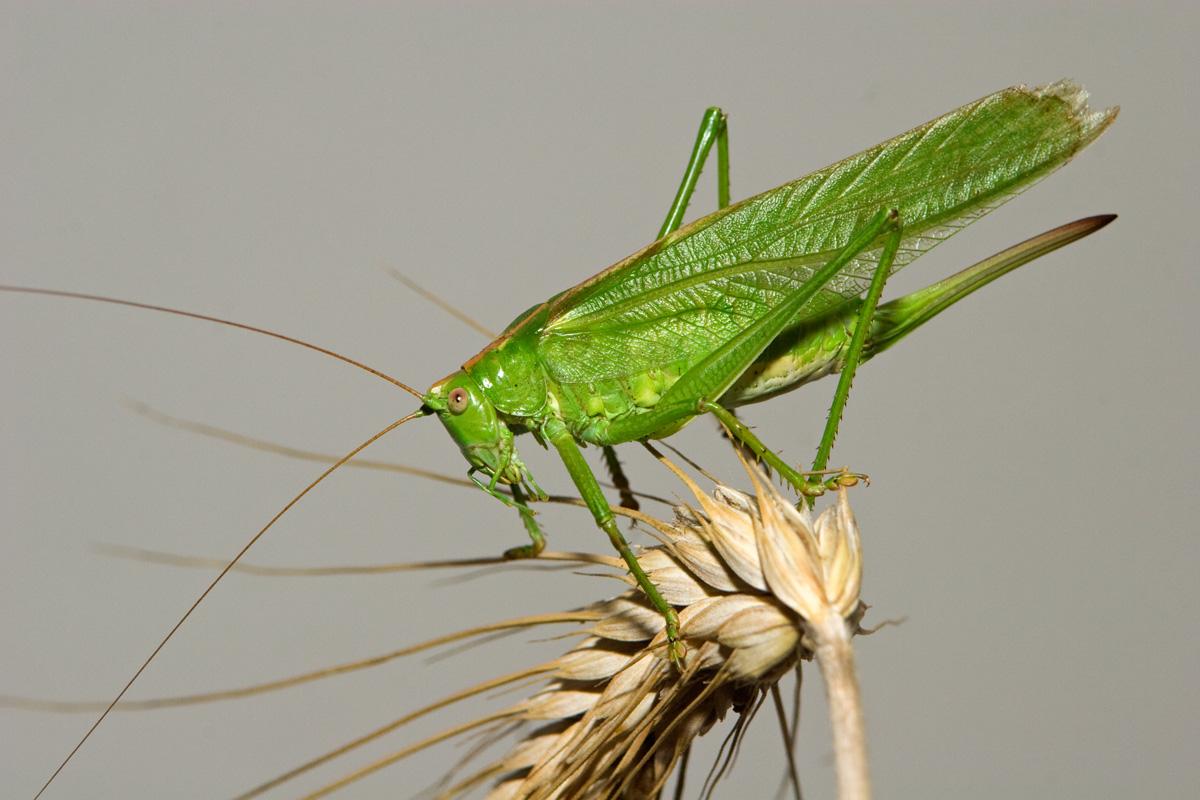