This butterfly belongs to the family of the Nymphalidae and is easy to recognise because of its chequer-board pattern. The typically coloured wings have a spread of 4.5 to 5.5 cm and their bright basic colour, as well as the design itself, vary. The lower side of the back wings of the females (generally larger than the males) is coloured cloudier than the males’ one. The top side of the wings has a white or yellow basic colour with the characteristic design and the bottom side is brighter and has got some small rosettes on it.

Because of the intensive use of pesticides in agriculture, the marbled white can not be observed in some regions any more, even though it is one of the most frequent species of butterflies. The distribution area spreads from Central and South Europe to the North of Africa. The marbled white prefers poor grassland but can also be found at the borders of woods, clearances and wastelands or even near villages or streets.

Very important for the survival of the marbled white is the condition that grassland is not cut until the middle of July. On one side, the grasslands represent the butterfly’s main food source and on the other hand they play a basic role during the development of the caterpillars. From July on, the females fly over the fodder plants and simply drop the eggs there. The caterpillars develop from the small white pellets and eclose after 2 to 3 weeks. They feed on different grasses and pass the winter under the earth. When the caterpillars reappear in spring, they eat again for about 10 weeks and then they pupate at the base of grass tufts. The butterflies eclose in June and fly until August/September. 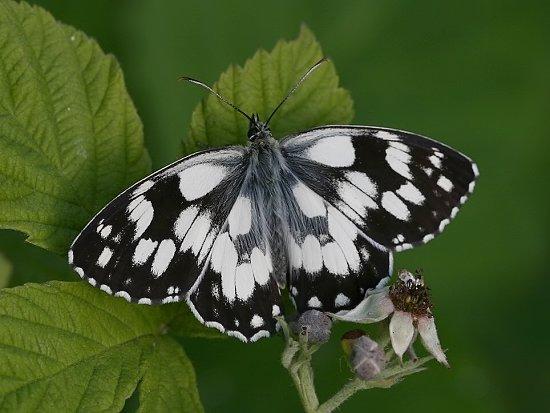